Sophie Yanow is currently drawing comics in Vermont and teaching at The Center for Cartoon Studies.

As I’m transitioning out of one place and into another (moving from Oakland/Berkeley to Seattle for the next 4 months), I’ve been taking care of business before I go, and thinking about how best to manage my time in the near future. I started looking at the ‘Getting Things Done’ book. Weirdly, I’d encountered it via a lot of cartoonists whose work I really admire: Kevin Huizenga has mentioned GTD directly a lot, and Dash Shaw said in an interview somewhere that he was into motivational books, I think maybe GTD but can’t I quite recall (Dash has said in interviews that his mom is a psychologist but despite that, he was attracted to the ‘low brow’ stuff). Kevin H has said it’s helpful for structuring his time, and has even offered some modifications and helpful additions on his blog, along with drawings. It must have sunk pretty deep into his psyche, because one of his comics in Fantagraphics’ Ganges #3 is called “Getting Things Done.” 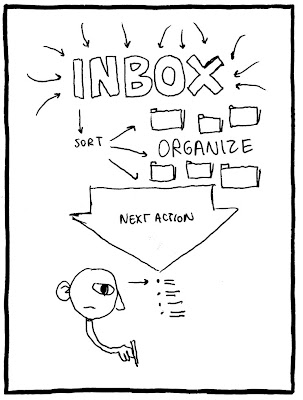 Yesterday I was sitting with my lady, playing with my brand new iPod Touch in a coffee shop (which she got me for the holly-days/our anniversary). I was getting all excited because there are lots of GTD apps for iOS. Of course, she’s had a field day making fun of me about my recent interest in this (and who wouldn’t). But! Her friend who works at the cafe came out and showed us some new audio programming books he was about to dig into (he’s a bay area musician who’s been getting a lot of play lately). I excitedly mentioned GTD, and it turns out he’s totally hooked in! All of this really makes me wonder how many of the productive people I know have read that book.